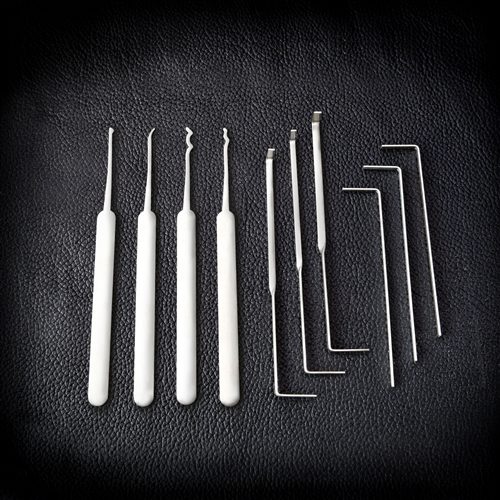 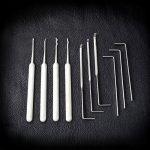 If you already own the Kick Start set then this is the next set you need to increase your tool set and the number of locks you can open.

With this set, you will increase the number of different rakes in your tool kit and build on the speed with which you can open locks.

Included in this set:

Rounding out the set is the traditional half Diamond .

The six tension wrenches are also all different than the ones in your starter set.

These picks are the same as the pro lock picks and also come in with the same smooth finish.

The “Shallow Euro” hook is intended for small and restrictive keyways often found in European, and “high security” locks such as Yale and Chubb. The slack curvature and slender profile allow the pick to slide past set pins and through highly restrictive keyways where a standard short hook is too large to do the job.

The “Small half Diamond” acts like a wedge while manipulating pins in keyways that are arranged in a manner that disallows a hook-type pick. The half diamond wedges itself under, and sometimes past the pins that are set too low to get a traditional hook under.

The “Best-Buster” is an altered profile similar to the traditional “snake rake”. This rake is effective on many lock types but is specifically designed for shallow, sweeping key bitings like those found in Best, Arrow, and Falcon locks.

The “Twin-Peak” is most effective on the withdrawal stroke of the making it one of the most effective rakes available. It differs from a traditional rake in the way it functions by using a “ramping” effect similar to bumping.

This Set has changed over time to improve its overall effectiveness.

As more information and new methods are developed it only makes sense to change the Kick start, Expansion Set and Grad to fulfill their roles as stepping stones in developing a great picking set.

To do this the kick start needs to have the 4 most practical picks, then the expansion and grad must build on top of that set.