Our Pal Hannah from Flower Picking reviews some of the latest Multipick lock picking tools avaliable from PickPals.


Once again, Multipick has taken something average from the lockpicking world and totally re-engineered it to make it their own and turned the quality dial up to 11.

I’ve personally made the habit of shunning cutaways and acrylic locks as far as their use for practice. They’re great tools for demonstrating how locks work and how the components respond to being picked, especially when demonstrating to those unfamiliar with the hobby of locksport, but they’ve never really been much use for more than that.

This is where the Multipick MK2 shines (literally) and leaves other cutaways in the dust. Here are my favourite features:

This is the first thing that generally grabs attention when compared to other cutaways. The attention to detail Multipick put into their products has a reputation for being precise and careful, and this lock shows that off unbelievably well! 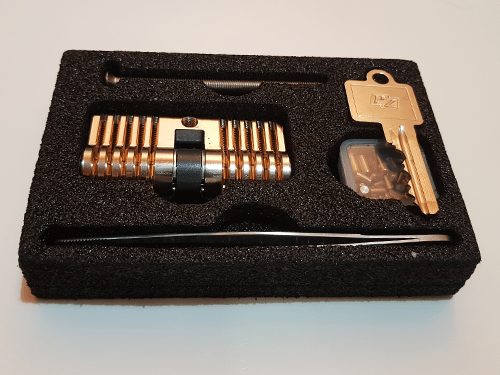 Note that this is a cylinder capable of 6 pins, but only 5 have been milled and made easily re-pinnable. This was likely due to a choice to keep structural integrity intact with the lock.

This was a nice feature added by Multipick which makes repinning significantly faster and easier! With the supplied allen key, simply remove the top grub screws, dump the pins and reload with your pins of choice!

The choice of Euro style lock gives good practice to learn how this popular lock style looks, feels and picks. Multipick have even provided a screw for mounting this in a door if you wanted to practice picking it while it’s mounted! (note it’s STRONGLY advised to never pick a lock that’s in use, even if you own it. Don’t use this to lock doors in your home with the intention of picking it open/practicing – mount this in a wooden board or practice door instead!)

Not only have Multipick included some nice security pins in the lock out-of-the-box, they’ve included a fantastic mini-pinning kit along with it, complete with pinning tweezers!

Please note, I used the Sparrows Mini Pinning Mat in the above photo to lay the pins out for demonstration purposes – it is not included in the MK2 package but can be obtained by purchasing the Sparrows Reload Kit!

And last but not least, my personal favourite part of the MK2 – the keyway!
This keyway will definitely be a step up from most cutaway locks.
The main advantage here is that not only can you use the lock to get a feel for different pins/pick feedback but also how to navigate a challenging keyway!

All in all, while a bit pricey compared to other cutaways for sure, this lock is definitely a prime example of “getting what you pay for”. The price may be on the higher end, but this is one of the highest quality commercially made cutaways you will come across and definitely worth adding to a lock-sporters collection!

Attention to detail and quality manufacturing doesn’t just stop there for Multipick. They also produce some of the most beautifully finished picks available commercially. In my case, these didn’t require ANY finishing or sanding and were perfect straight from the factory – something that is extremely rare in the lockpick world and usually only the case with picks that are handmade to order.

Luckily, Multipick has once again brought this quality to the masses:

The picks above show the finish straight from the factory. You won’t get any snags from these!

Even the tension wrenches were laid out beautifully!!!

The quality of the case and the stitching is fantastic. Every pocket for each tool is a perfect fit!

Now, onto one of the more unique and AWESOME things Multipick has done:

The Adlatus is simple in design, yet elegant – which is a rare way to describe something in the locksport world, but I think the Adlatus nails that description! Every piece of aluminum here has been milled to perfection, down to the last detail.

It features an adjustable handle for the angle of the holder (as well as a way to move the handle itself out of the way via the red button!)

Multipick has even kindly included some silicon feet (along with the clamp being covered with silicon) to prevent any damage to surfaces you choose to attach it to.

And, finally, the main reason I love the Adlatus….

I can finally pick euro locks at my desk!!! No longer need to move stuff over to fit the massive vise! 🙂

If I had to whinge here about something, it would be that unfortunately, you can only mount euro style cylinders and ONLY mount them as shown – the euro orientation. Some people prefer the lock mounted the other way around so the pins are picked upwards.

With that restriction in mind though, the Adlatus is meant to be extremely minimalist – and it does do it well.
For those wanting to mount locks in either orientation, Multipick also makes the Centurion which is the big brother of the Adlatus – however with that, you also lose the very small size and the adjustable angle the Adlatus has, so pick whatever suits your needs best!

What is in a Locksmith’s Toolbox?

What are High-Security Locks?