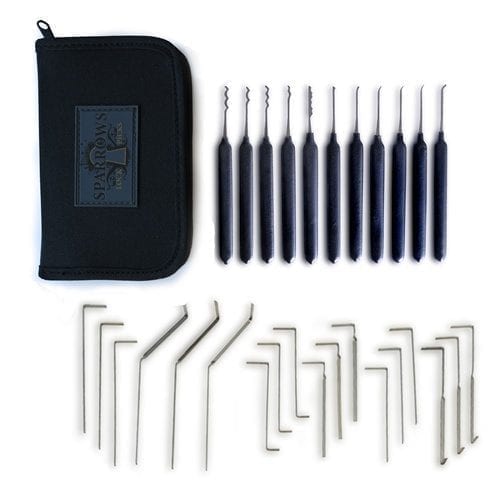 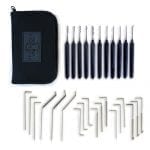 This is Sparrows main hardcore lock pick set that was designed with the help of Wizwazzle. This fully professional set includes 11 picks with thermo handles and 18 different tension wrenches all wrapped up in our multi pocket Sherman Case.

All lock picks are manufactured by Sparrows out of American Made 301 Cold Max steel with average tension strength of 280,000 PSI.

An all inclusive range:

With a full selection of hooks, rakes and diamonds you will be able to defeat almost any lock with no doubles or useless picks. With a large selection of tension wrenches you will be able to find the right tool to apply the proper tension. Each pick has a low profile from handle to tip allowing greater keyway control for North American, European, and Asian Locks. This is a complete professional lock pick set for both sport and work.

NO DOUBLES & NO FILLERS

The “Best-Buster” is an altered profile similar to the traditional “snake rake”. This rake is effective on many lock types, but is specifically designed for shallow, sweeping key bitings like those found in Best, Arrow, and Falcon locks.

The “Twin-Peak” is most effective on the withdrawal stroke of the makeing it one of the most effective rakes available. It differs from a traditional rake in the way it functions by using a “ramping” effect similar to bumping.

The “Worm-Rake” is Designed to emulate as many key bitings as possible when used. This size worm rake is designed for attacking Master, Abus and Schlage Locks.

The “Triple-Peak” is used on the withdrawal stroke of the makeing it one of the most effective rakes available. It differs from a traditional rake in the way it functions by using a “ramping” effect similar to bumping. Similar to the double peak with different spacing.

The “Small half Diamond” acts like a wedge while manipulating pins in keyways that are arranged in a manner that disallows a hook-type pick. The half diamond wedges itself under, and sometimes past the pins that are set too low to get a traditional hook under.

The “Steep Hook” is very similar in effect to the high reach tool, but is intended for very restrictive and tight, high security locks. With its downsized, slender profile, it is also very useful in taller Euro style keyways.

The “Offset Hybrid” is a combination of a shallow hook, and a rounded half diamond. The wedge-like point and specially rounded bottom edge slides through the keyway. With the pick acting as a centered fulcrum you will find that this pick has extremely smooth and controlled lifts. This is critical for locks like ASSA.

The “Standard short hook” or lifter is the first “go-to” pick in the arsenal. This Pick is more versatile and is used more often than any other pick. It is designed to let the picker feel of the intricacies of the lock and manipulate pins individually. When the pick is used in a raking type technique it is also possible to work several pins at the same time. This pick is good for a wide range of keyway types, and pinning arrangements.

The “City Rake” is a standard rake that has proven to be indispensable over the years. This pick does a fantastic job of emulating the key bitings found among most common commercial and residential locks such as Kwickset, Weiser and master.

The “Shallow Euro” hook is intended for small and restrictive keyways often found in European, and “high security” locks such as Yale and Chubb. The slack curvature and slender profile allows the pick to slide past set pins and through highly restrictive keyways where a standard short hook is too large to do the job.

The “High reach” is designed to access and set very high (or Short) cut pins, that lie directly behind a very “low”(or long) cut pin. The dimple cut at the tip adds extra pin control, especially helpful when attacking the pin from the side.

All lock picks are manufactured by Sparrows out of American Made 301 Cold Max steel with average tension strength of 280,000 PSI.