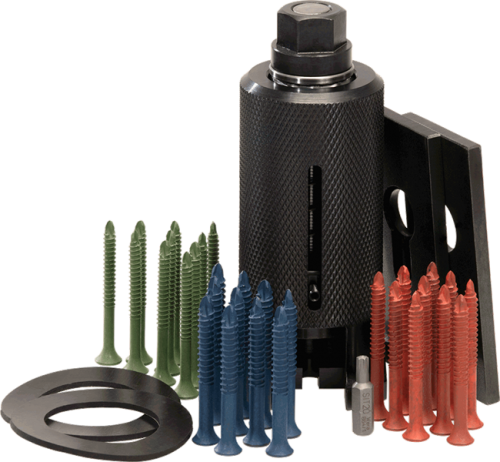 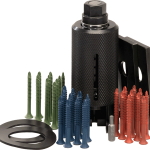 The “BELL” is one of the most important tools and absolutely indispensable for any emergency locksmith.

* The adhesive rubber protection rings preventing scratches on the escutcheon.

The “BELL” allows the fast opening of doors without damaging the door or the door guard and often is the only effective manner of a time-saving emergency-opening, especially in the case of multiple-bolt locks and half cylinders (cylinders that only contain 1 plug and can only be opened from one side of the door), as commonly used for example inglass-doors, garage-doors, alarm systems, and shades.

It is also possible to only remove the plug itself from the cylinder using the included base plates for the pulling of plugs that allows quick and easy access to the locking mechanism.

As the device works with a single and centrally oriented pulling-mechanism, there are no lateral forces during the actual pulling. This avoids the tilting or breaking of the special pull-screws.

For its compact and robust design and its simple and easy use, the “BELL” is considered one of the best plug-pulling devices among international specialists. The Bell is made from hardened steel for year-long use.

The pulling mechanism has a very fine, hardened M12 thread for smooth working without having to exert any greater strength.